Meet the newest addition to our family. No name yet since we do not know if it is a boy or a girl. I am thinking it looks like either a Larry or a Gina. 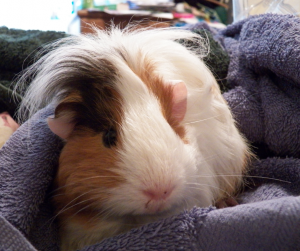 Scruffy and Fluffy - So Cute!

We recently decided to give away our parakeets, Justin and Feathers. My daughter did a great job of taking care of them without complaint for over two years. I am so proud of her for that! But when it came down to it, birds just weren’t a good fit for our current living situation. 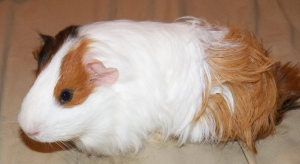 However, I do feel strongly that a kid who is willing and wants to take care of a pet should be allowed to do so. Not only is it a good chance for them to learn about responsibility, it can be a companion to help keep them from being bored and for them to have someone to talk to that won’t judge or interrupt. So, we searched for something else that would be small enough to not count in the “no pets” clause of our apartment lease.

A neighbor got her little girl a hamster a few months ago. It was so cute and she got hours of enjoyment out of it! But it also bit, which I didn’t think my daughter would like. So we ended up getting … 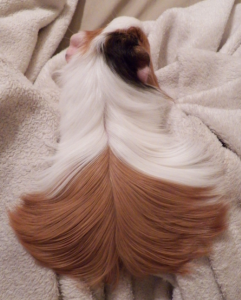 Wow. Its hair is so long, even after a trim.

So, will this be a good pet? Time will tell, but here is what we think about it so far …

When you are 9 years old, it is difficult but possible to sit calm and still. My daughter had a very hard time containing her excitement the first couple of days after we got it. It doesn’t “run for its life” when it sees her coming, but it does kick its feet in protest when she grabs it. For now, an adult will have to take it out of the cage but it is content to sit in her lap and be brushed and talked to once it’s out.

Just like with people, a guinea pig’s long hair can get tangled. Even though the pet store we got this one from seemed clean and the owner clearly interacted with and got to know the animals on a daily basis, he neglected to keep the guinea pigs brushed. As a result, we found several large mats and tangles when we got our new pet home. I spent the first two days grooming, brushing, trimming tangles, and gently washing a few areas where it appears to have sat in something unpleasant. It didn’t like being held still while I cut out the largest tangles, but it has been content with most of the rest of the process.

Ahhh , That's better. <br> Now could you please put away the camera?

This is a very calm pet (even when frightened, it just wants to hide under a blanket or in a corner). I think it will be boring to play with in the long term, but my daughter loves to do crafts and make things for the ones she loves. I imagine that in the near future, several of our Saturdays will be filled with making things to keep the Guinea pig’s cage pretty, which I hear they actually like!