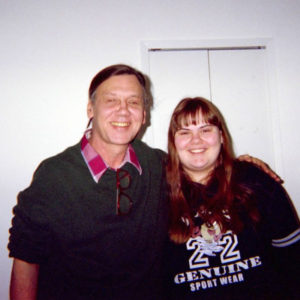 Do I look like my dad? I think I got his nose, but I can’t decide if my eyes look more like his or my mom’s.

This picture is the only one I have of us together. He and my mom went their separate ways when I was a baby and (to the best of my knowledge) I didn’t see him again until I was about 18.

I was so happy when we found each other through the power of the internet. My dad remembered me! You have no idea how many nights I lay awake, wondering if he ever thought of me. I was so impressed that he not only remembered that he had a daughter – He remembered my birthday and what time I was born and how big I was! He told me stories of when he and my mom were together. I was so happy when I found out that he really wanted me!

My dad and I stayed in touch off and on for about 15 years. In that time I got both confirmation that he loved me and confirmation that my mom made the right decision in excluding him from our lives. For as swell of a guy he was, he was also irresponsible. And at times he would say things that were very hurtful!

In that time my dad was good about writing letters to me. He gave me 2 kittens, a computer, a (musical) keyboard, a water globe/music box, and several other little items. He congratulated me when my daughter was born but he did not ask to see her. I think he knew that he was not at a stable enough point in his life to be a good grandpa. But he did send me money to get her a Disney Princess crib set when she was little and he bragged on her pictures as she got older.

I remember after months, possibly a year of not hearing from my dad, he contacted me on Facebook. I called him on the phone and he sounded like things were going good. He had a broken shoulder, but he was excited to tell me about his friends and his nice new apartment. He asked for my bank account information because he felt bad about never sending any child support. I declined the offer in part because it sounded like he needed the money more than me, but mostly because my mom didn’t raise me to be giving my personal information out to strangers!

5 months later his shoulder was still broken. He told me that the doctors could not fix it. A few weeks after that he shared the good news that his hospice care would be starting soon. … WHAT?! Hello! Did you forget any little details about your life while we were catching up Dad? Turns out he forgot to tell me that he had cancer.

As grateful as my dad was for the help of hospice care, he was determined to live another 5 years. He never could admit that the end was near. Hospice not only helped my dad around the house, they helped us to have the discussions that I didn’t know how to start and some that I didn’t even think of. Like should my dad be moved closer to me? And what kind of arrangements should be made for when he is gone?

A few months later, hospice called and let me know it was time to say goodbye. I didn’t know what to say to this man who I spent most of my life wanting to know, but in reality he still very much a stranger.

I told my dad that I loved him and said some quick goodbyes. Then I sat there on the phone, awkwardly listening to each breath as I waited for the workers to realize we were finished talking. I thanked them for the call and asked some friends to pray with me that Hospice would know how much I appreciated them and that they would be successful in adjusting my dad’s pain medications so that he could go peacefully.

A few hours later, I got a call that it was over and that he did go peacefully. I felt an unexpected rush of emotions. I could not put my finger on exactly how I felt. Peaceful and thankful that his suffering was over. Sad that I would never see my dad again. And another feeling that I can only describe as hollow. As if a feeling was supposed to be there – but instead there was an empty space waiting for somebody to “insert appropriate feelings here”.

I did not go to my dad’s funeral.

My employer offered to lend me some traveling money when I told her my dad was in hospice. I was going to take her up on that offer, but to be honest I didn’t see much point in borrowing money to attend the funeral of someone I barely knew. It would have been different if he was still alive or if I could afford to go without borrowing money.

The hospice workers accepted his flag on my behalf and sent it along with a DVD of the service and several of the shell casings from his 21 gun salute. They also packed a box of his belongings for me to treasure. I smiled when I saw the cute little tea set. We were planning a trip to see him the month he passed away. He was so looking forward to having a cup of coffee with his granddaughter. I assume he got it specifically for that occasion.

Memories of my dad

When I miss my dad, I am left with these memories: