This is the story of my first Islander Bell Pepper.

I chose this plant for its pretty purple fruit. 🙂 It will be lavender or purple when ready to pick. The Bonnie website says that if you leave it on the vine long enough, it will continue to get sweeter and ripen into a very dark red color. Other websites say that picking it at this purple stage will lead to more pepper production, and they will still continue to ripen into sweeter red peppers after picked. 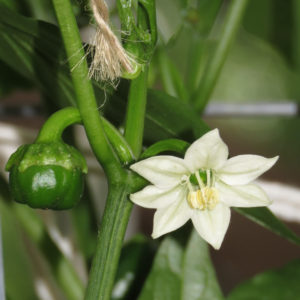 After a very mild winter, I decided to plant my first Islander Bell Pepper in mid-February 2017. I planted it along with a Bush Goliath tomato and a Sweet Yellow bell pepper. This was the slowest to grow and between cold nights and a hail storm, it dropped many flowers in the first couple of months.

Three months after planting, my peppers are finally looking like they are going to make it! I just hope the plant can handle all the little buds I see ready to bloom. My biggest pepper is a little over an inch tall, but on the skinny side. I assume it will fill out with time.

This plant has performed beautifully, but the peppers are not turning purple. The ones that I did leave on the vine long enough to turn went straight from green to red. The guy down the street says his did the same thing. I will try to contact the Bonnie company and see if there is something about our North-East Texas climate that could cause this, or if they think somebody just switched the tags at the store.

We have eaten most of the peppers while they are still green. When we need a pepper in a recipe or for a snack, I just go out to the vine and pick which ever one looks the best. (Picking them before they are ready, they do seem to make a better cooking ingredient than raw snack.)

We are currently fighting blossom end rot. I got some lime from my grandmother a few weeks ago. It helped, but I am still getting BER on about 40% of our peppers.  This weekend I will add more lime to the pots and fertilizer to the water and to prune back anything that looks sick or like it is simply finished putting out new growth.