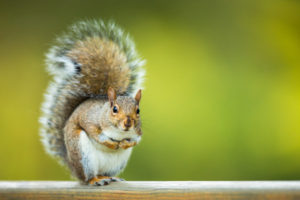 It can be interesting to see a pet act in a way that shows compassion and thoughtfulness. People often say, “she doesn’t even know she’s a dog.” They will credit human influence for behaviors from sitting on furniture to watching over a sick child.

It is a humbling experience to watch a wild animal show the same kind of care. Whether it be a bird taking care of its injured mate or the love and patience a mother shows toward her young, this behavior brings an intriguing question: Is it really human nature rubbing off onto our four-legged friends? Or is it just nature to care.

I got to see some of this good stuff first hand a few years ago when I went to pick my daughter up from her great-grandmother’s house.

As I drove down the road to Grandmother’s house, I saw two young squirrels playing in the road. They were so cute! I wanted to pull over and turn on my camera, but I knew they would run off as soon as my car got near. Sure enough, a few seconds later, the slightly bigger squirrel darted off like greased lightning!

The smaller squirrel just froze, unsure of what to do. I slowed my car so he could have time to think. But he was petrified. The bigger squirrel jumped and chittered in the grass as if saying, “Hey, over here. Get out of the road you nut-head!”

As my car approached, the bigger squirrel could not stand the suspense any longer. He ran back into the road, gave his friend a nudge, and darted halfway back to the grass before turning around to see that the little squirrel hadn’t moved. Then he went back and looked as if he were tapping the smaller squirrel on his furry little arm.

The little squirrel finally realized that her friend was there to help. The two of them scurried to the side of the road and up a tree, side by side. I was impressed by the friendship that these two animals shared.