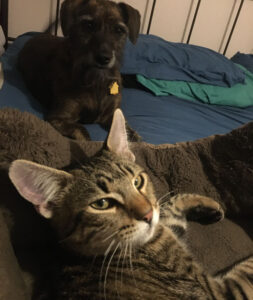 I heard a meow at the back door a couple of months ago and called, “well come on in”. To my surprise, a young neighborhood cat took me up on the offer and quickly made himself at home, begging for a sandwich and taking over the dog’s bed.

He appeared to be clean and healthy, but very hungry. We gave him some cat food, but he also tore into every form of bread he could get his paws on and tried to climb in our plates while we ate. I asked around and found out that he spent the last several days eating out of the trash and asking the neighbors to let him in.

I tried to return him home 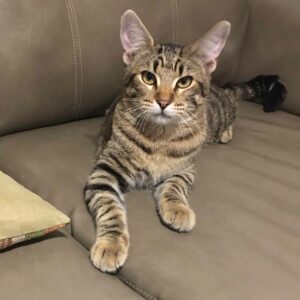 A couple of ladies claimed the cat as their own. The first was walking her dog. She asked her husband how their cat got out, scooped him up, and took him home. A few minutes later she came back laughing that this cat looked EXACTLY like her cat and even had the same temperament around their dog. But when she got home – her cat was there waiting.

The second told me that she put him out for spraying. She missed her cat and wanted him back. So we scooped him up in our arms and started walking to meet her halfway. (Tip: If your male kitten starts “spraying” and making everything smell bad, the correct solution is to get him neutered. If money is tight, contact your local SPCA for suggestions.)

At the sound of his former owner’s voice, Neighborhood Cat started growling. When we didn’t turn back, he jumped from my daughter’s arms and ran away. I guess he was her cat, but she clearly crossed a line. … I didn’t even try to help her retrieve her cat. I thought I saw him around the neighborhood a few times after that, but he kept his distance.

The cat came back, the very next month.

Over a month later, my dog got very anxious at the sound of cats fighting in our front yard! When we went out, one of the cats ran away and the other mowed for me to help him out of the tree.

Our once vibrant and mischievous neighborhood cat had grown a little and calmed down a lot. He had a big appetite and he was still somewhat alert and playful, but something wasn’t right.

Sneezing Blood. Something is not right. 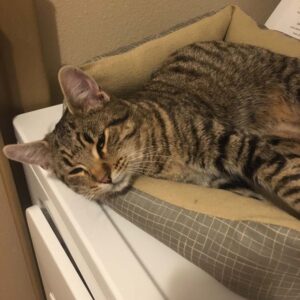 I checked him for fleas and swung by the vet’s office for a de-wormer after finding something resembling sesame seeds under his tail.

Soon after giving him the wormer, I realized that the red splatters I was finding around the house were not spaghetti sauce. The poor kitty was sneezing blood!

A trip to the vet’s office confirmed that his blood was not clotting as it should. But he is young and appeared to be otherwise healthy. Considering he is an outdoor cat and a stray, the vet decided he must have eaten a rodenticide (rodent poison – probably rat poison.)

The vet gave him a shot of vitamin K and a week worth of Vitamin K supplements. He asked me to keep the cat in the next several days while he healed, to make sure he didn’t sustain any injuries that could lead to internal bleeding. (Contact your vet ASAP if you suspect your pet has eaten rodent poison. Different poisons will require different treatment and I have read that the Vitamin K from the vet’s office is a different strength than what you get at the store.)

I did let him out on Day 3. The weather was beautiful and the cat was getting tired of being cooped indoors. Unfortunately, sneezy nose bleeds were worse after only a few hours outdoors.

Day 5 he was still bleeding, but it wasn’t as bad. Neighborhood Cat took his last dose of Vitamin K on Christmas Day. He wasn’t sneezing near as much and the weather was once again BEAUTIFUL! So we said our goodbyes and set him free!

The cat came back, because he wants to stay. 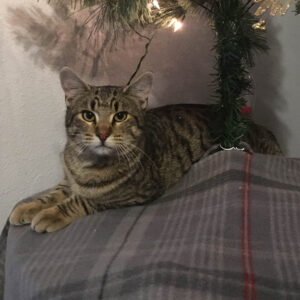 We have been putting that cat out for a week now. He clearly feels much better! A couple of days ago I had to put him out for galloping through the house at 3AM lol.

I am still looking for a family to take him in. But Neighborhood Cat, a.k.a. “Kitty” has decided that our home is his home.

Out of desperation to save my furniture without over-spending on a cat that is not mine, we got him a cardboard scratching post from the store, much like this cardboard scratcher* from Amazon.com. I was surprised to see that he actually used and enjoyed it!

A few days later we were walking Leah (dog) and found a cat tree/scratching post that somebody threw out. It was broken but fixable. Now Friendly Neighborhood Cat has two places to scratch without getting told “No!”