For my 25th birthday, my best friend and I made our own “pin the tail on the donkey” game out of paper, crayons, and tape. It was SO much fun!

A few weeks later, when my daughter turned 5, she wanted to do the same. The game did not meet her expectations. … She loved the sound of it! But it was nerve wrecking for my five year old to stumble around blindfolded, and it was boring for most of the other kids.

She wanted to give the game another try on her 7th birthday. But by that time I was tired of following traditional themes. So, I came up with a new game – Toss The Tail To The Tiger! 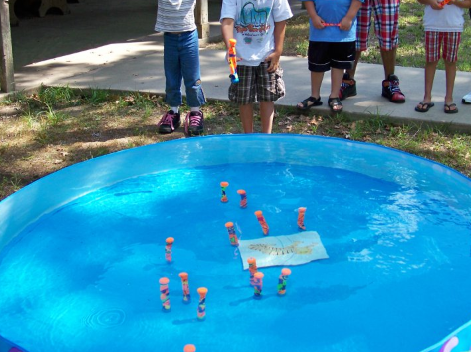 Kids Playing: Toss The Tail To The Tiger

“Toss the Tail to the Tiger” is similar to “Pin the Tail on the Donkey” in the fact that the object of the game is to unite a tail with an unfortunate mammal who has somehow lost its tail. But the actual game is played very different.

I filled a 6 ft wide by 18 inch deep pool with water and had a friend draw a tail-free tiger on the back of a garage sale sign with waterproof markers. (I chose a sign with a white back made of material that would not float.)

My friend placed the tiger near the middle of the pool. Everybody got a tail (pool toy) and took turns tossing their tail to the tiger from about 3 ft away. Eventually we let the kids stand very close to the pool (to where their hands were almost even with the edge of the water when they tossed the tail.)

As you can see from the picture above, the refraction from 18 inches of water was enough to make this game very hard for both kids and adults. Only one boy was able to get the tail within an inch of the target.

If anybody else tries this game out, I would LOVE to hear how it goes!