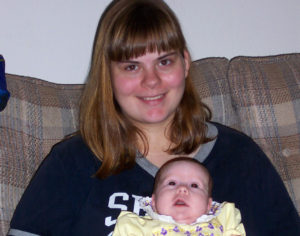 I was 20 years old when my daughter was born, but many people thought I looked younger. The picture to the left is after being aged by 2 months of sleep deprivation by a newborn.

Even now, at 37 years old, I rarely go a month without somebody asking if we are sisters. I am sure that some of these people are just flattering me. But some genuinely think I look too young to have a 17-year-old. This question is often followed by people asking how old I was when I had her and if it was hard to have a child so young.

I have always been flattered when people think that I look younger than I am. But yes, it does sometimes make things harder.

The challenges of having a kid when you are young

It is hard to get started in this world, and having a kid only adds to the stress! I will admit it. I wasn’t much of a “grown-up” at age 20. I didn’t have a driver’s license, and I had to give up my full-time traveling job to create a more stable environment for my baby.

I applied for several jobs in my hometown, 100% ready to be a good worker and a responsible adult. But you can’t put your kid in daycare and buy a car when you don’t have a job. And applying for work when you haven’t yet sorted out childcare and transportation arrangements doesn’t exactly scream “responsibility.” I ended up doing a lot of babysitting plus occasional photography and business card design to help make ends meet.

When her father left, I learned that landlords don’t like to rent you a decent home when you are young! Even with my mother willing to co-sign on a lease, I ended up having to move in with my grandparents because nobody wanted to take a chance on a 22-year-old with 2 dogs and a toddler.

Living in the public eye

There are plenty of people in this world willing to share their opinions on what they think is a “kid raising a kid.”

Multiple people made it clear that they thought I should give my baby up for adoption.

When I was experiencing some intense morning sickness, a pharmacist seemed to think I was a teen runaway and suggested we call my parents.

When my daughter was a few weeks old, a traveling saleslady actually pulled her car over to give me a lecture on how I should be in school – not pushing a baby down the street! By the end of our conversation, she thought I might be 16 instead of 14. But she didn’t want to believe that I was 20.

And there have been multiple times that people in the store tried to get me to wait for my mom to approve the outfit I wanted to buy or to walk us out to the car.

A teacher even tried to stop me from taking my daughter home when she was in Jr High! Although, by that point, I had aged enough that it didn’t take much to convince the teacher that I am a grownup.

The advantages of having a child while you are young

I think one of the biggest advantages to having my daughter young has been having the energy to do stuff with her!

I also look forward to having more years to get to know my grandchildren and great-grandchildren if my daughter has kids of her own.

I will not regret the past. But if anybody were to ask my advice on the subject, I would encourage them to wait until they are out of high school and have a decent home and job and are in a committed, trusting, loving marriage before starting their own family.