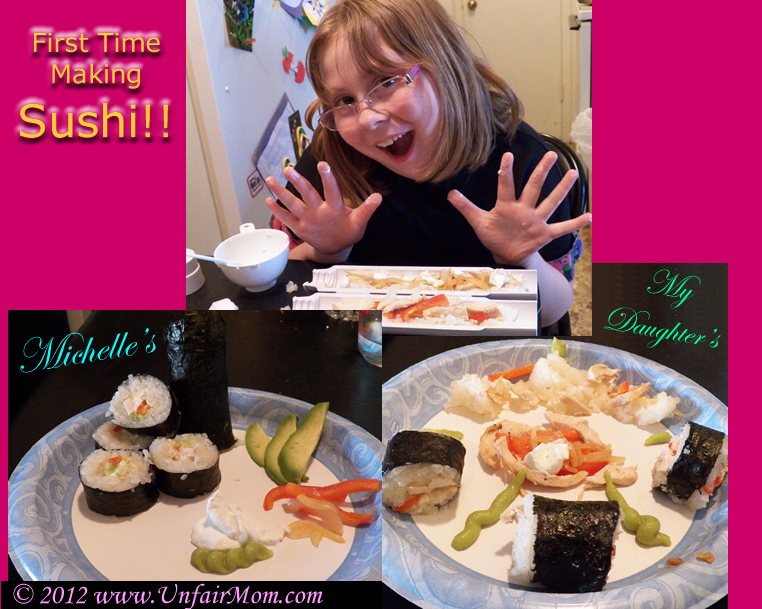 Would Unfair Mom really make her kid eat seaweed? You bet I would!

Nori (roasted seaweed like used in sushi) is supposed to be fairly healthy. When I saw that our small-town grocery store had it and everything else needed to make sushi, I decided this is the perfect time to introduce my 9 year old to sea vegetables! … Surprisingly, the package I picked up has no calcium, which is one of the things seaweed is supposed to be a good source of. Next time I will read the packages before selecting one.

I got a Sushezi Sushi Made Easy from Amazon.com to help us shape the rolls right. – I think it helped a lot! Although, I would have rather created slightly skinnier rolls with less rice.

For anybody who is curious how we made it, I thinly sliced red bell pepper and onion and threw that in a hot skillet with a little butter. I would have used green bell pepper too, but we were out. Once the vegetables were tender, I poured them onto a plate and did the same thing with some thinly sliced chicken breast and part of a fajita seasoning packet. I also sliced an avacado and got out half a tablespoon of cream cheese for extra filling.

We followed the directions on the packages for making sushi rice, forming, and cutting the rolls.

It was delicious 🙂 My 9 yr old only ate a little of her seaweed, and she said that next time she wants cheddar instead of cream cheese and she will skip the wasabi.

It turns out my daughter isn’t a big fan of sushi rice. But she does enjoy the more flavorful rolls on occasion. In fact, we had sushi for her 19th birthday!